The House on Via Gombito 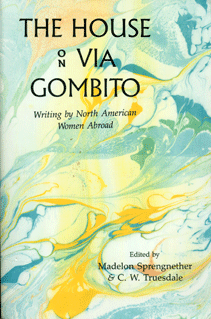 The House on Via Gombito: Writing by North American Women Abroad
Travel
42 women speak of their own transformations through the experience of travel. The varied accounts describe spiritual journeys, ancestral quests, tales of culture shock, comedy, terror, and more.
Excerpt
p. 409-410
Vicoletto: Scenes from Naples

That week, my father hired a driver to take us the 60 miles along perilous mountain roads east from Naples to Pescopagano, where my grandfather was born in 1880. Set in a mountainside with limpid valley stretched below and gray hills ringing the horizon, Pescopagano is as remote from modern Italy as a town in the Ozarks is from New York. Many young people have left for jobs in the north or in Germany, but they come back every year for the Festa di San Francesco di Paolo, the town’s patron saint.

By coincidence, we arrived the afternoon of the festa, June 30. From the high-ceilinged bedroom where I was napping in Cousin Maria’s house, I heard the music of John Philip Sousa. The town band, followed by chickens and children and women pushing baby carriages, paraded through the narrow streets. In my halting Italian, I asked Maria, “Why Sousa?”

“He is universal,” she said.

We spent the afternoon going from house to house in search of people who remembered my grandfather. Everywhere we were embraced and served a glass of wine. My father immediately began to converse, and I asked questions about genealogy. One old woman insisted on showing us the house where my grandfather was born. As we stood on the cobblestones, chattering and gesticulating, a short, bald man in a bright blue suit came out on the balcony. Then he disappeared and returned waving a piece of paper. “I have a letter from your grandfather,” he called out.

The relatives explained afterwards that he is a little crazy, does nothing all day but sit in his room wearing the bright blue suit. But I saw him as a man of perception and unrecognized talent. Not only did he save the letter my grandfather wrote from Pittsburgh in the early 1920’s, but he put his hands on it in seconds. It was the only written proof I had of my origins in the town, for the graves of my great-grandfather and great-uncle had been dug up, if indeed they had ever been there, and the bones piled in an open ossario or bone room. As I stared at the mound of skulls, I realized that I had traced the family connection as far back as it would go.

What I had in common with the town was more elementary than a name or a letter from America. Staring into the gray hills with the moon rising above them, I could make sense of the mountain air in my grandfather’s demeanor. He was the mountaineer who had looked toward the mountains, and one day traveled to the sea on the other side. Now I understood some of the nostalgia he brought with him – his taste for the local cheeses, cacciacavallo and burro, the first a soft provolone sold in two balls connected by a string to be thrown over a horse’s neck (cacciacavallo means horse’s catch). And the second, burro, a soft mozzarella with burro or butter in the middle. I understood why first my father and then I savored these tastes instinctively, and whey we both had what my mother called “itching feet.”

I stepped off the bus and into the Piazza Dante in the heart of the Old Quarter. Giovanna, still pursuing my tourist interests, seemed energized by the din and the heat; she spoke faster and faster, taking my hand and pulling me along the narrow sidewalks. I had trouble understanding her, my answers in Italian, resistant and sleepy.

Drenched in art-love and sometimes a heated mother-daughter dynamic, this yet-to-be published memoir-novel - Falling for Botticelli - takes us from one side of the family in Germany to the other in Italy.