Turning the Feather Around

My Life in Art

A note from the author…

In the mid 1980s I first met George Morrison when he permanently moved to a studio on the Grand Portage Reservation, along the shore of Lake Superior. Several times I wrote about his art and that of his wife Hazel Belvo. The more I stood on the whale-colored rocks along the shore and looked out at the immense lake’s horizon, the more likely a George Morrison sky “would unfold in playful immensity.” Early on, his Native American heritage struck me as crucial to his artistic vision. The small colorful “horizon paintings” did it best, I thought. “The little paintings continually turned…a fresh perspective onto the lake’s changing momentum.”

We lost touch, George suffered from a rare cancer, he and Hazel were divorced. When I saw George again, more stooped than I remembered, yet still vibrant, something told me he was ready to tell his story. He agreed to try, with my questioning and taping him, and he revising his memories, and searching deeper. Some thirty interviews later, including some in which both George and Hazel participated, I was ready to shape the scores of pages into what would become this book.

In a healing ceremony, George had been given two Native American names–Standing in the Northern Lights, he used for an important exhibit in Saint Paul. The second time I visited he suggested we use his other name as the title of our book. The name helped shape it. “The feather of his idea fluttered and showed its spine: George had surprised with a little joke.” To introduce each chapter, titles from his small horizon paintings added what felt like other ingredients in George’s “magic.”

“Only George can paint his picture in words, offer us humor and humility in the face of the vast lake, or place bits of driftwood turned just right to reveal the winding current of his many changes,” so I wrote in the introduction. The book was published in 1998, and George died in 2000, one of the premier artists of his generation, beloved for his particular talent of blending Native American heritage with 20th century American modernism.

As part of the George Morrison exhibit at the Minnesota History Center, Margot spoke about the book. This video has a taste of the talk that evening.

More from Turning the Feather Around…

p. 9
From the Introduction…

“Now more than ever, it seemed wrong to put any sort of Euro-American overlay on George’s work… Let his silences remain silences, unembroidered with speculation; let his avoidance of the brag yield its own sturdy pride.”

“My grandmother and my mother used to carry tobacco that came in little pouches. They used to add it to the fire in the cook stove. Burning tobacco and making the smoke rise up was supposedly to carry the smoke to the spirits. Maybe the old Indian used to throw tobacco in their campfire for the smell and for the ritual, for the magic. That was kind of nice, I thought.”

p. 128
George Morrison on his work
“Paintings in wood—that’s how I see them. They come out of my head. I make them from scratch, yet they are derived from nature, based on landscape. There’s a horizon line in each one, about a quarter of the way from the top. That’s an absolute straight line, made with a pencil, to help guide the work.” 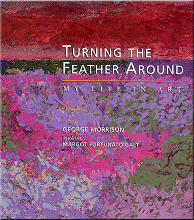 Margot and George Morrision talk about Turning the Feather Around.