Up to the Plate

Margot interviewed many former players in the League to write Up to the Plate. Chapters describe their delight in storming the field for the first game in 1943. Individual and team plays are chronicled with grit, speed, and intensity. As a substiute for men’s baseball during World War II, the League survived 12 successful seasons of play. With many illustrations of action photos from the players’ own scrapbooks, and portraits of players and the Midwest communities that supported them, Up to the Plate proves that women made success full-scale athletes.

More from Up to the Plate…

p. 33-34
The Millerettes’ opening game was a minor disappointment, with the California-bred trio of Wiltse, Faye Dancer, and Pepper Paire limiting the Rockford Peaches to a one-run win at 5-4. Halsey Hall was impressed. “Chatter was the only feminine touch to the proceedings,” he wrote. “In a welter of flaring skirts, headlong and feet-first slides…bodily contact, good pitching, and really brilliant outfielding,” the Millerettes performed like genuine Ballplayers, with Dancer a “fly-catching genius.” The team seemed ready to go the full season.

Visiting teams from smaller towns enjoyed the big city excitement. They hung their laundered underwear in the windows of the Sheraton Hotel and received a huffy reprimand from the front desk. They paid a quarter to sit in a velvet pew at St. Olaf’s church for Sunday services, and, ignoring the rule against socializing with the opposition, ate frog legs with women from rival cubs at Charlie’s Café Exceptionale.

Despite Faye Dancer’s antics on the field—cartwheels on her way out to play, handstands while waiting for a hit—fans weren’t as closely involved in the game as the women would have liked. “At Racine, Kenosha, South Bend, or Rockford, the fans could almost reach out and touch us,” explained Dottie Wiltse. They could easily talk to the players and watch the blood fly when Dancer slid into base with her famous hood slide that put bare skin to the dirt.

p. 49
The most exciting ball was probably played by Thelma Eisen, called “the Ty Cobb of women’s baseball.” Rivaling Sophie Kurys, she stole 128 bases, hit .256, and hit the only two home runs managed that year by the [Peoria, Illinois] Red Wings.

Total attendance at league games in 1946 reached 754,000 in the eight cities, triple the number of three years before. Racine, [Wisconsin] set an all-time record for its four years—probably not a surprise, as the Racine Belles held the season lead early and landed the championship at the end…

One Blue Sox fan gave prizes of silver dollars, war bonds, radios and record players to batters who hit doubles or triples. Even at Playland [in South Bend, Indiana], the All American Girls beat out the other competition for audiences and chalked up a single-game record of more than 7,800 fans. 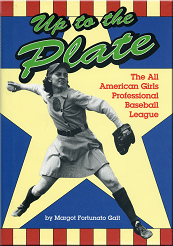 "Tracking down and interviewing originating members of The All-American Girls Professional Baseball League in preparation for writing Up to the Plate was a thrill, as were my visits to the ballparks where they played in South Bend, Kenosha, Peoria."
–Margot Galt