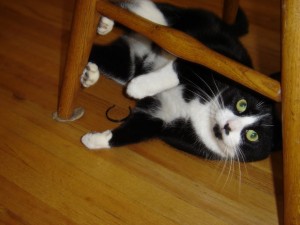 This is Julia. Black and White. Came to us from Pet Smart when they still had a store in the Midway. Third cat of three. Smallest. Eating more. Rounder. Kitler, so we were told by soon-to-be son-in-law. Kitten-Hitler=Kitler. We thought he made it up. Came to find out there’s a website devoted to Kitlers. Odd phenomenon –that moustache-goatee of black on the funnel of white. What genies lurk?

Second black and white cat in my life after Clarence, named for first husband’s grandfather, Baltimore Dutch-American pencil maker. Clarence from Kansas. Not Dutch. No Kitler effect. Unlike Julia in fur and girth: large and furry. Julia small, thin-haired, big-eyed.

The damsel’s history: The “incident report” from the Humane Society vets recorded that they had trouble telling the tiny nine-month-old mom from her two kittens. Either she ran away with the boyfriend or never had a home because she and her twin kits were brought into the Saint Paul Animal Humane Society near Como Park. Kits adopted. Her hysterectomy botched, poor girl. She was quite sick and fostered out. Survived. Caught kennel cough. Fostered out again. (Those good people who take in needy animals!)

Second or Third Life Chapter: Fran walks into Pet Smart. When Pet Smart still had a store in the Midway, I did all the cat purchases. There was a reason: Vietnam Pacifist, jailed for seventeen months in the federal pen, Fran melted when he saw cats in cages. “They want to be liberated!” he exclaimed. That was his excuse for adopting middle cat Maggie or Magnolia or Merryland. (Watch for her history.)

Julia also petitioned for freedom. He fetched me to decide. Who could resist? She still wasn’t entirely well, but soon lived up to our hopes for a playful rascal to tease Maggie and even older Tilly out of their lethargy.

Her name: from John Lennon’s song of the same name, written for his mother and performed on the 1968 White Album. His mother was killed when he was 17, by a drunk, off-duty policeman. His soon-to-be wife Yoko Ono inspired “Oceanchild” in the sone: her name in Japanese means child of the sea. “Julia” also offers up a line from Kahil Gibran: “Half of what I say is meaningless but I say it just to reach you.” This fits our communication with our Julia. She squeaks tiny high squeaks, we squeak in reply. She “rowls in her throat,” we rowl, or at least I do. Cross-species talk is best conducted by those who believe in it.

My favorite things to write about…

Thanks for your comments!